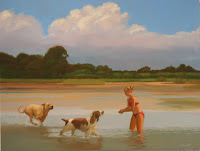 I finished this painting the other day. The catalyst for it was a photo I took of my daughter when she was about 13. I have had it on my drawing table in my studio since then (eight years) and I have always wanted to incorporate it into a painting. The setting is Andy's Way and it is late in the day- my favorite place and time. The dog running through the water is Rembrandt, who discovered that he loves water last summer. I guess he has some lab in him deep down in his gene pool. The Springer was inspired by my friend's dog, named McDuff.
The painting is 18" x 24" oil on panel.
Posted by Kathryn Freeman at 8:47 AM 1 comment:

Portrait of a Relationship

This is the narrative portrait that I finished recently. It was commissioned by a woman for the man she was about to marry, as a wedding gift. It was presented to him on the nineteenth and they were married on the 26th! It was a great project because the client completely understood the concept of a narrative portrait and had so many ideas to bring to the painting. The picture tells the story of their first "meaningful" date as well as the story of the proposal. Elements in the painting tell of her interests and his interests and how they are bringing those things and melding them into their relationship. Their dog, who is a big part of the picture (real and metaphorically) is the narrator of the painting and makes eye contact with the viewer. The client didn't want to be very "big" in the painting but rather wanted to be secondary to the story the painting is telling. Thus they are the couple standing in the middle distance, on the bank of the Chesapeake. Other elements of the painting emphasize the concept of a twosome- two sailboats, two trees, two towers on the bridge, etc. Here are four images from the first thumbnail studies, to the composition on graph paper, to the grisaille with partial imprimatura, and the finished painting below. It is oil on panel, 24" x 36".

Posted by Kathryn Freeman at 11:20 AM No comments: