When I paint a narrative portrait for someone I always think of myself as the weaver and my client as the provider of the yarn.  With my recent project my client provided some truly beautiful and rich threads to work with! The painting is a gift to his wife to celebrate their marriage and their family. Right from the beginning I was moved by his love and admiration for her. He took so much time thinking about the project and carefully choosing photos and memories from their many years together, that he thought she would enjoy, for me to incorporate into the painting. It was truly a labor of complete adoration by him and thus very inspiring for me to create it.

The concept of the painting was to represent their life together and their travels, as well as personal talents, interests and occupations of the parents and their three children.

He thought that his wife would like a deep space that would feel like a window into another world. I looked to several Dutch street scenes as inspiration for the composition and architectural elements (Both of them like Dutch paintings.)- One by Willem Koekkoek and one by Joods Dommersen. 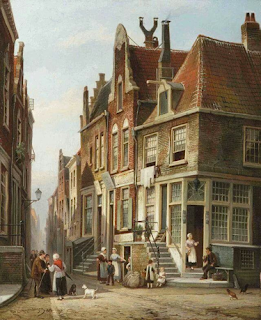 On either side of the street are two little interiors.  On the left, a couple sits at a table in an intimate scene of domestic happiness as they plan their next trip together. There is a map on the table and an antique globe lifted from Vermeer’s painting- “The Astronomer”.  The pose comes from a painting by Pieter de Hooch titled “Couple with Parrot” 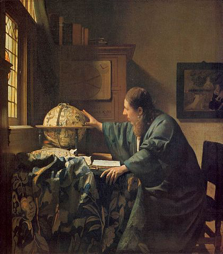 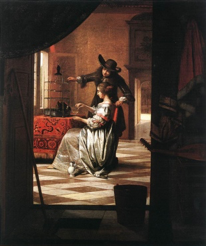 In the foreground of the interior is a suitcase with a guide to Paris and a beret - a tribute to his wife’s love of French culture and language. The Pinocchio hanging from the chair is a reference to the client’s profession.

On the upper level of the house a young man stands with a telescope. This is the eldest son who is at SpaceX in California, working on sending a rocket to Mars. Note - the moon looks a bit like Mars - and there is a rocket stream in the sky.

Also on the left side monkeys cavort on the roof tops - these are from some of the many photos of animals taken on their family trips.

Connecting the composition from left to right is their daughter as a little girl dribbling a soccer ball through the street and a young version of their two boys, about to launch a model rocket. The family does not have pets but I couldn't resist adding a little hound in the door at the right as a symbol of fidelity.

In the interior on the right side there is baking going on. The two younger children are serious bakers and it was difficult picking which gorgeous cake to include in the painting. Also in this interior are a trumpet their daughter plays, a typewriter and an apple with a bite out of it. The younger son is a screenwriter and also works for Apple. On the back wall is a map of Indonesia -a frequent destination for the husband and wife before they had children. In the upstairs window is a Probiscus Monkey - one of the family’s favorite creatures from their many trips. It is sort of a family joke because probiscus in Malaysian means old Dutch uncle. 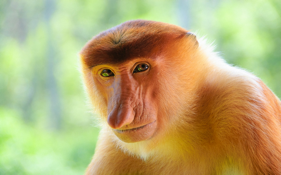 Now for the landscapes. There were so many to choose from and making the transition from one to the next to create a deep space was one of the many enjoyable challenges in this project. At the end of the street are a number of warriors from the tomb of a Vietnamese emperor in Hue, which make way for a bridge in Nara, Japan. The couple, in their early years together, are about to cross the bridge to visit The Golden Temple in Amritsar India. Behind the temple the landscape changes rapidly to Morocco and five camels just visible on the horizon, before your eye makes a leap to the vanishing point for the entire painting - which lies somewhere beyond Machu Pichu.

I feel honored to have been asked to collaborate on this project, to have gotten to know this amazing family vicariously through their personal photos and stories, and to bear witness to the deep love and pride a man has for his wife and children.

Posted by Kathryn Freeman at 9:42 AM No comments: