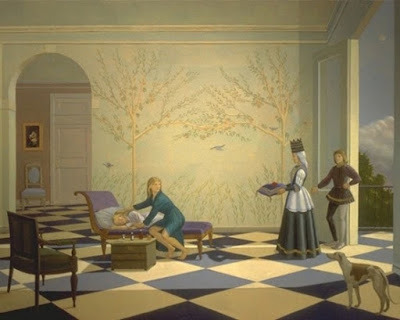 Many years ago I was asked to do a painting for a fundraiser in New York City that was being held for the Big Apple Circus's Clown Care Unit. http://www.bigapplecircus.org/clown-care which was started by a legendary man and legendary clown Michael Christensen- also known as Dr. Stubs.
The Clown Care Unit is a group of specially trained clowns who visit the hospital rooms of sick children. Michael/Dr. Stubs believed deeply in the healing power of humor and felt that "clown rounds" could do great things for sick kids and their families.  I was  honored to be asked  because I believed in the idea, and I am always searching to make my work meaningful to humanity.
I did a painting called "The Queen of Hearts". The painting is of a mother by the bedside of a sick child. She hears a sound at the door to the room and sees The Queen entering the room carrying a heart on a pillow.
I attended the Clown Care Benefit Auction at the Nancy Hoffman Gallery in Soho. It was a magical night with both benefactors and clowns chatting and mingling. One clown kept walking by me and sneaking things out of my purse then handing them back to me with a twinkle in his eye. The clowns were so funny and colorful, they lightened up what might have been a typical stuffy black tie art evening. I could imagine how cheerful, comforting and entertaining they must be for a child who feels miserable and frightened in a sterile hospital room.
In the middle of the evening someone came up to me and told me that "The Queen of Hearts" had been taken out of the auction. I wasn't sure what had happened at the time, but I later found out that the organizer  of the benefit had actually purchased "The Queen" for Michael.  Here is the story from Michael, in his words, which he wrote to me earlier this spring in an email.

I am standing in the basement of an art gallery in Soho watching pieces of art arrive that are going to be auctioned off to benefit the Big Apple Circus Clown Care Unit.  The Queen of Hearts, a painting by artist... Kathryn Freeman, just arrived.  When I see it, I start to cry and don’t know why; it doesn’t matter; this painting touches my soul. I immediately turn to the gallery owner and make a bid for the painting, $1,000.  Fat chance. The painter is very well known and since it is a benefit, my bid will not even cover her minimum.

Rick Segal, the man who organized the benefit stands next to me and says: “You will never get it.” Thanks, Rick. Thanks for your positive attitude.

The evening of the auction arrives and I, dressed as a clown, am the auctioneer.  I do my best to run the fine line between entertaining the audience and selling the art.  Right in the middle of selling a piece, Rick whispers: “The Queen of Hearts is gone.” Ok. I loved it. It touched my soul and it is gone. Ok. I accept that; many things and people I love leave. It’s ok. Let’s continue with the job at hand; let’s sell as many pieces of art that we can at the highest prices possible to benefit our program.

I am in the dressing room after the show taking off my makeup. Rick comes in and says: “Michael, follow me; I have something to show you.” He stands me in front of the Queen of Hearts and says: “Wendy and I bought this for you. You deserve it.”

The Queen of Hearts hangs on the wall in our living room.  I don’t remember when I first noticed it. I was standing on the landing.  I looked at the painting and felt that there was something different. As I looked more closely, I noticed that the sunlight that was streaming into the living room of my home lined up perfectly with the “painted” light that was streaming into the living room of the piece. I stopped. It was perfect. There was no difference between what I was experiencing in life and what I was experiencing in the painting; they were the same. This time, I didn’t cry; I wondered.

More. Maybe it happened every year and I just didn’t notice; maybe it happened only this year, only now, only in this moment. I am sitting in the living room with my wife, Karyn.  She says: “Look at the painting.” I look up to see the child’s face illuminated by golden light, warm, soft golden light only on the child, perfectly aligned; the line separating painted life from breathing life is dissolved; there is no difference.

Michael also sent me some photos of the painting lit by the natural sunlight in the room in the way he had described it...  I am so happy that Michael and his wife have "The Queen of Hearts" and I am honored that my work and life have touched theirs. 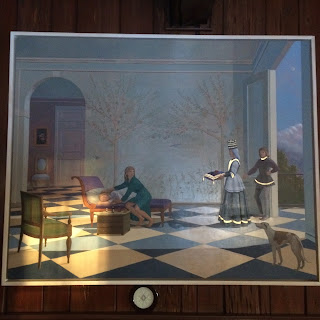 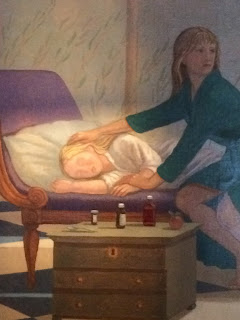 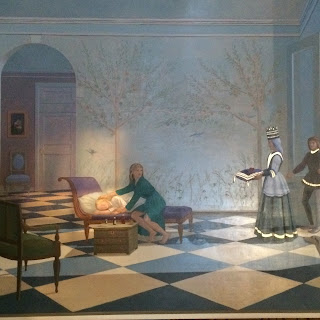 Posted by Kathryn Freeman at 4:54 PM No comments: