"The Sunday Paper" and homage to "La Grande Jatte"

I finished this painting, "The Sunday Paper", just in time to frame it and put it on a truck to Dog and Horse Fine Art, in Charleston, South Carolina. My show there opens on Friday night and I am very excited about it. http://www.dogandhorsefineart.com/index.php/exhibits/item/kathryn-freeman-a-perfect-reality  Come to the opening if you are going to be in Charleston! There will be jazz music and cupcakes! Along with wine, of course. Charleston is known for its Friday night art openings. 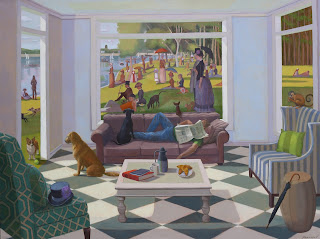 
As you can see the interior of the painting is a typical Sunday morning in some houses-guy on the sofa, dozing off while reading the Sunday paper. His faithful dogs would love to go to the park, but their owner won't wake up and take them. So the park is coming to them.

Georges Seurat's incredible painting, "Sunday Afternoon on the Island of La Grande Jatte", has had a huge role in my development as a painter over a period of 30 (at least) years. I fell in love with it when I was in graduate school, -for its formality, compositional brilliance, such as the use of the golden section and diagonals, use of the silhouette, shape repetition, shape symbolism, and about a million other reasons. Seurat was a genius and so much more than the "pointillism" technique he used for awhile, which tends to be his big claim to fame in art history books. He died at age 32 and I always wonder what he would have produced if he had lived longer. He was a skilled draftsman as well as an auspicious colorist, so he was capable of anything.

Whenever I feel confused about painting (frequently) I return to La Grande Jatte along with going back to look at Vermeer's "Woman in Blue Reading a Letter". Those two paintings clear my head, reinforce what painting is about, and restore my faith.  I had seen lots of studies and reproductions of La Grande Jatte but I had never seen the big finished painting until last year when I finally got to Chicago. The painting took my breath away and I felt dizzy standing in front of something I had studied and admired for so long. I spent the entire day there.

It was time to pay homage. So I decided to make the park in "The Sunday Paper", La Grande Jatte.

I had to expand Seurat's landscape a little bit so that it was visible out the door and the side window, and I borrowed a few figures from some of his other paintings and studies. As you can see, a few elements of the painting have already seeped into the room. The monkey on a leash being held by the woman with the black parasol has sneaked into the picture along with her hat, as have some of the vertical elements and diagonals. I do realize that there are a lot of people who are not reading a hard copy of the newspaper anymore, so there is a tablet (maybe a kindle?) on the coffee table on top of the red book. So that is me tipping my top hat to new technology, while also tipping it to one of the greatest paintings of the 19th century. Thank you Georges.

Posted by Kathryn Freeman at 12:26 PM No comments: