A few years ago a mother of three daughters asked me to do a little still life for the middle daughter as a high school graduation gift. She brought me various objects and photos to include that represented her daughter's childhood. There are two of her favorite stuffed animals, a favorite pink perfume bottle, her rosary beads, a special box, a bracelet, and a photograph of the Australian Shepherd she grew up with.  There is also a swimming medal (she is a great swimmer!), and an envelope with the Sacred Heart logo on it, representing her education. The background is a William Morris design with lilies for her name.

A few years later the youngest daughter was graduating from the same school and I was honored to do a portrait for her as well. This daughter was quite an outdoorsman and an artist well as a swimmer. She liked a different color palette. Her well worn hiking boots anchor the composition posed with her very much loved stuffed rabbit. Also from her outdoor life are a couple knives, one for whittling and one for everything else. Her school team swim cap is in the painting as well as her blue goggles. Some of her creative projects -an amazing duct tape cap, a cup and a few other items complete the composition. (She made a lot of beautiful pottery while in high school which I had the pleasure of seeing when I helped her assemble her portfolio). And not to be forgotten is her favorite book "The Hobbit" and a little photo of herself with her sisters. In this painting the Sacred Heart logo is pinned to the wall. 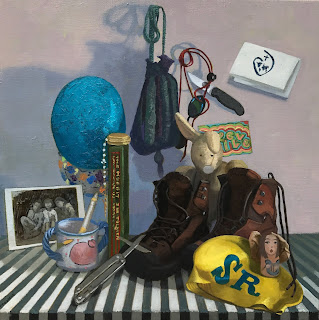 The oldest daughter graduated in 2018 with an MBA from University of Chicago and her mom asked me to do a still life portrait for her on this very important occasion. (We didn't do a portrait for her when she graduated from high school because her parents had given her a study from the Jacksonville Murals that I had painted during the time she was growing up. She was a huge Harry Potter fan and the study was of Hedwig.) 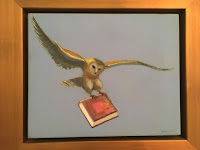 So this daughter's portrait became an amalgam of objects from her childhood as well as her current life as a young woman living and working in Chicago. Raggedy Ann and Andy were made for her by her grandmother. The mirror, perfume bottle and tray sat on her childhood dresser.  Other favorite objects in the painting are the pearls, a silver bracelet and her class ring which bears the logo of the Sacred Heart. The shared experience of being educated at a Sacred Heart school was important to the three sisters. They are very close to each other even though they live spread out across the country.
The two books depicted are "book ends" to her love of literature. "Chronicles of Narnia" was read to her by her father when she was a child, and she read Anna Karenina while an undergrad at Northwestern. Another nod to her time at Northwestern is the purple lanyard draped across the mirror. Also on the mirror is a small photo of the three girls when the youngest was a tiny baby. The two older sisters hold her between them in their arms. A crucifix that  hung on her childhood bedroom wall is reflected in the mirror. The envelope that rests on top of the books displays the University of Chicago graduate school logo, emphasizing the transition of time/stages of life that are present in the painting. The Chicago skyline, her current home, defines the landscape behind the objects and reflects the foreground composition. 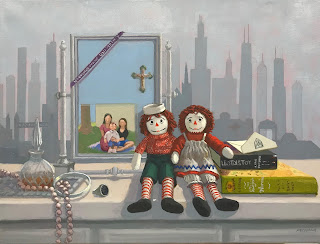 Posted by Kathryn Freeman at 12:03 PM No comments: