I just finished painting "Mending the Tigers". I have been working on it since March 9 when I last posted about it in progress. It has been almost three months. People often ask me how long it takes me to do a painting but I never keep track. So now I know. I guess keeping a blog is good in that respect. 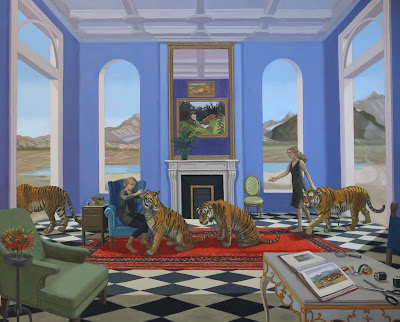 As I mentioned in my earlier post the idea came from a short story by Aimee Bender called Tiger Mending. It is a mesmerizing story so you should read it. It is in her collection called "The Color Master". Here is a link to her website http://aimeebender.com/.
I interpreted her story to have an environmental message. In my mind the tigers were coming out of the mountains to get help from humans. Their stripes falling off as symbolic of the fragility of this great beast in the modern world. The young woman mending the tigers represents the mindfulness, inventiveness and skill it is going to take for us as the responsible party to "mend" the environment. While she is the creative and the talent who has the ability to do the mending, her sister, leading the tigers in, is the facilitator-the person with the brain and resourcefulness to make things happen.
(Note that this is my interpretation. There are others out there that focus on the relationship between the sisters).

While I was preparing to do this painting  I looked at lots of paintings through art history that were about tigers both to see how they were handled by artists in terms of drawing and painting but also to see their place in art.  I went to the Barnes Foundation in Philadelphia to see Henri Rousseau's "Scout Attacked by a Tiger".  It is a brutal scene but Rousseau's vision is magical. They seem like mini figurines in long grass. The tiger's anatomy is a little odd but it makes for an enchanting painting. I hope the tiger came out on top of the situation, but Rousseau keeps us guessing. 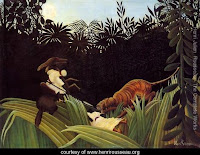 Eugene Delacroix was another great painter of tigers. I especially love his "Tiger Resting" which I also included in "Mending the Tigers", hanging above the Rousseau, and his beautiful watercolor and pencil study, simply called "Tiger". It is in the National Gallery.  I included it as a plate in the book in the right foreground- as if the young woman was studying it to see how to stitch the stripes back on.

Posted by Kathryn Freeman at 11:27 AM No comments: