End of an Era- a quarter century- Private Sale

I am moving my studio for the first time in 25 years. It has been a lovely studio at the top of my house, full of light and space. I am going to miss it but I am ready for a change and with change will come more ideas and more paintings. So before I leave it I want to clear out my painting racks to make room for the next stage both mentally and physically.  I decided to have a little sale of these items for my dearest friends and patrons. There are small paintings and drawings. Have a look and if there is something you would like to have let me know right away. These are all from different stages of my career-different themes and different series dating all the way back to when we lived in Brooklyn. Sizes are approximate. Some of the photos are not that great because I have been packing my studio and decided to do this at the last minute. Some things never change! 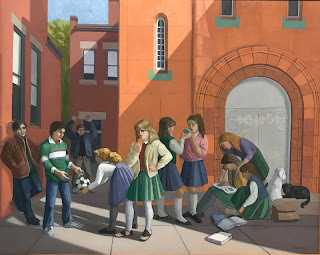 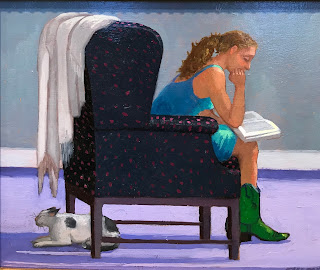 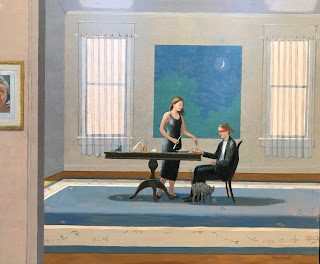 Education of the other Senses-Touch, oil on panel, 20" x 24", this painting was in a solo show called "Sense and Sensibility" shown at the Tatistcheff Gallery, 57th Street, NYC. $400 framed sold 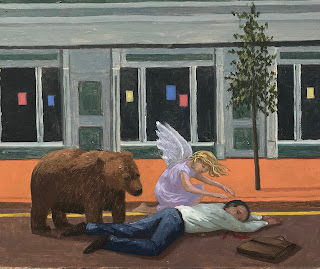 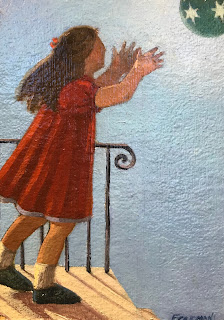 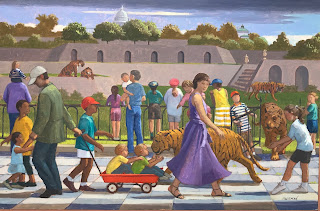 Liberation of the Tigers, oil on panel,  16" x 20", Study for the Peaceable Kingdom painting of the same name that is in the Cleveland Clinic, Naples FL, $350 sold 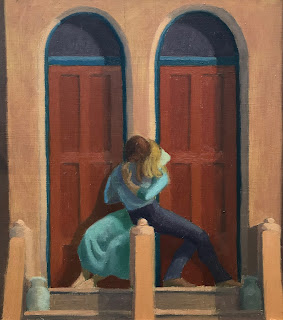 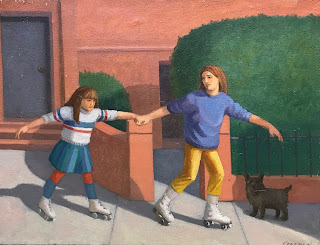 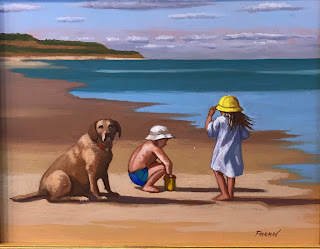 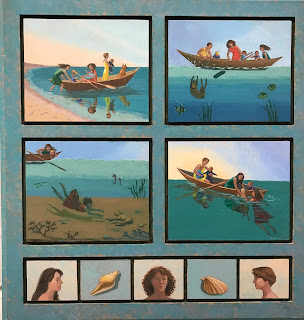 The Rescue,  28" x 32", oil on wood- I am and will always be in awe of Italian predella painting and for a period when I was living in London, I did several multiple panel narrative paintings inspired by them. I have always loved telling stories.  $500 sold 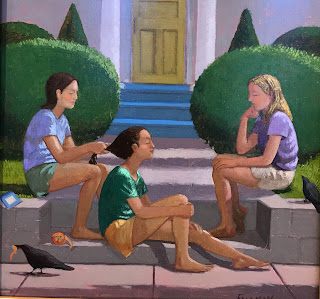 Three Graces, 10" x 12", oil on panel- from my Girls and Ravens series. A painting from this series is in the Polk Museum in Naples, Florida.This was a study for the large version, which resides in DC $350 framed sold 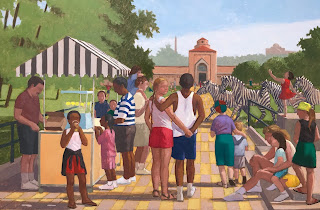 Zebras Running, oil on panel, 16" x 20"- Study for The Peaceable Kingdom series. The large version
is in the Cleveland Clinic (I think) sold

Drawings
all drawings are $200 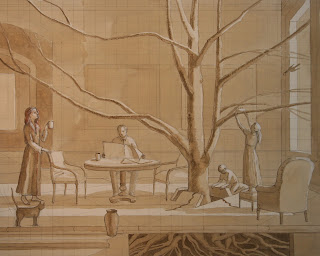 "Arbor Day", sepia ink on paper,  study for painting of the same name which was shown at Tatistcheff Gallery, 57th street NYC 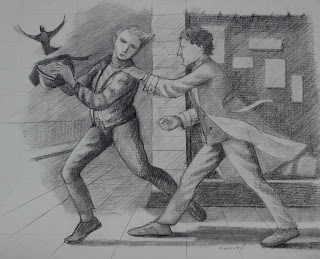 "Black Bird Fly", charcoal on paper, study for a big painting called Black Bird Fly that I did in London which was shown at Tatistcheff Gallery 57th street 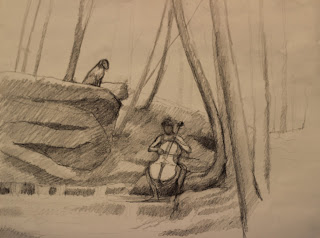 "Cello in the Woods", graphite on paper, study for a painting in the Stories from the Woods series 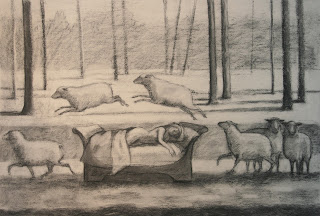 "Counting Sheep", charcoal on paper, study for a painting I did in London and was shown at Tatistcheff Gallery, in Chelsea sold 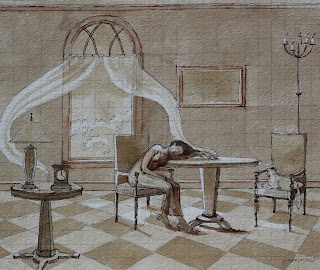 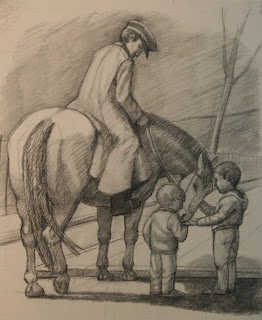 London Mounted Policeman, charcoal on paper, a study for the painting "Black Bird Fly", which was done in London, and shown at Tatistcheff Gallery 57th street sold 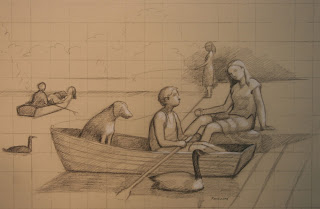 Rowboat, Hyde Park, charcoal and white chalk on paper, study for a huge painting I did in London called Sirens of the Crescent Moon which is in a large corporate collection. 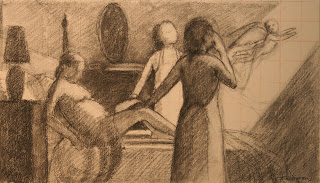 "She Heard the Midwives Whisper", charcoal on paper, study for a painting inspired by the Isabel Allende book "House of Spirits" 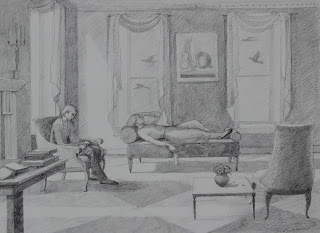 "The Conversation", charcoal on paper, study for a large interior, which is in Boston 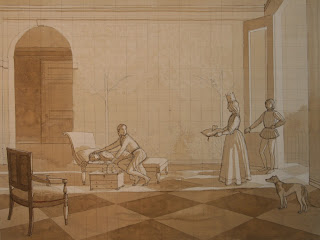 "The Queen of Hearts",  sepia ink on paper, study for a large painting that was auctioned to raise money for the Clown Care Unit of the Big Apple Circus. The man and head clown who started the Clown Care unit, owns the painting. The story is in the archives on this blog. 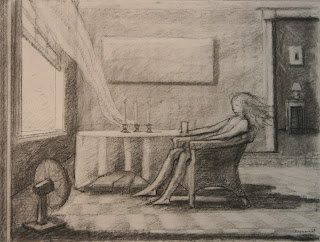 "The Virtues of Air", charcoal on paper, study for a painting from the Painted Stories series, London 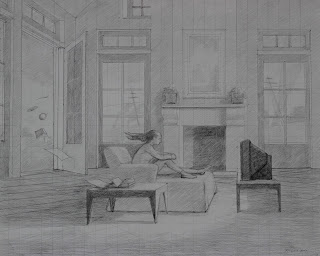 "The Weather Channel", charcoal on paper, study for a painting that is in an environmental law firm in DC 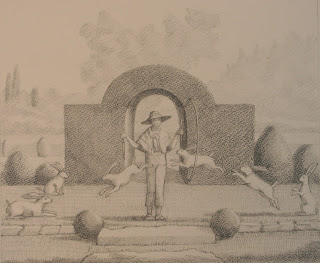 "Trained Garden Rabbits", charcoal on paper, study for a painting in my Enchanted Garden series that was shown at Tatischeff Gallery in Chelsea sold 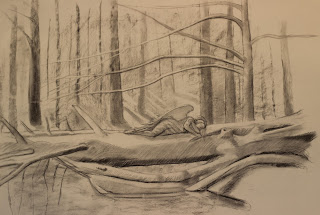 "Woods Angel", charcoal on paper, study for a painting of the same title from the Stories from the Woods 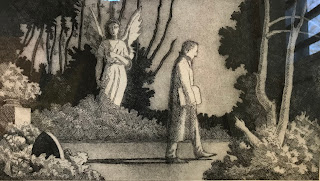 Posted by Kathryn Freeman at 2:49 PM

Glad I found this blog.This article gave me all of the info I need. thank you.
Wedding photographer in jaipur
Seo company in jaipur
call girl in jaipur