I loved doing this painting because it reminded me of an Italian predella panel that tell the story of the life of a saint in the various stages of their life and work.
This is Adrienne, mother of four, cherished and adored wife, talented and much traveled cook, and animal lover. Adrienne saw my painting "Lake House after the Storm" and related to it having experienced the flooding from Hurricane Harvey in Houston, Texas where she lives. She had a birthday coming up and her husband Jody contacted me. After some discussion, and learning that Lake House was no longer available, Jody asked me to create a painting specifically for his wife, including things that were dear to her. Jody was wonderful to work with as he had studied a number of my paintings and had a good idea of what I needed. He also liked the composition in Lake House-a series of arches that structure the rectangle so we decided to do something similar for Adrienne's painting. He sent me family photos and pictures of their home and their dogs and cats (a wonderful menagerie!). He told me some great stories and family legends including the phenomenon of the Christ figure statuette from Rio de Janeiro that continuously turns to face them no matter how many times they straighten him to face forward. The figure is included in the painting on a pedestal...facing Adrienne. Adrienne's three sons are grown men now but in the painting they are young boys playing ball, visible through the arch on the left. Adrienne lost a baby girl but the child lives on in her heart so Jody asked that I include a little girl in the painting. She is in the arch to the right, in a translucent pink dress, releasing white doves into the sky, where images of Adriennes's mother and father and brother Michael, are subtly represented in the cloud formations. The bookshelves are lined with Adrienne's collection of cookbooks that she formed during many international trips. Adrienne is wearing a formal blue gown that she wore as mother of the groom in her son's wedding. Some other small things are another painting of mine, called White Stockings, which they have in their collection as well as a few images of creatures that come and go on their property in Houston including deer, a white heron, and the hen that is watching Adrienne closely while she prepares a feast. Note- a favorite book and film of Adrienne's and Jody's is Babette's Feast, and Jody decided that Adrienne's Feast would be a perfect title because of the way she instills love into all aspects of her life. 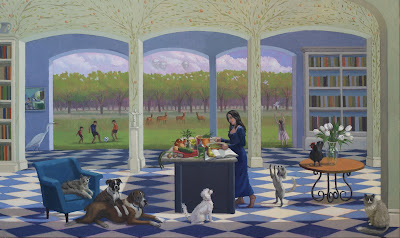 Posted by Kathryn Freeman at 10:14 AM